1 Corinthians:
The Epistle of First Corinthians has been recognized as the work from the mind of God and penmanship of the great Apostle Paul (1 For. 1:1; 16:21). The internal evidence of its teachings along with the vocabulary lends strength to the testimony of the authorship and also revealed the character of Paul.

The apostle became the missionary to the Gentile nations, following his salvation, conversion from Judaism, and call by the Lord (Acts 9:15). Sosthenes, a dear saint, was with Paul as he penned this letter. No other proof exists of any contribution by Sostehenes to this writing. Paul, at the beginning of this letter, simply mentioned the greeting of Sostehens to the brethren.

2 Corinthians:
The present day country of Greece consists of the Roman provinces of Macedonia and Achaia, regions in which the apostle Paul and his associates ministered for at least a couple of years during his second missionary journey. According to Acts 16:11-18:18, Paul’s labors in the province of Macedonia, which is northern Greece today, resulted in the establishment of three churches, the congregations in Philippi, Thessalonica, and Berea, while his ministry in Achaia, the southern area, yielded converts in Athens and a church in Corinth. Evidently, a church was also established in Cenchrea, a suburb of Corinth (Rom. 16:1).

Paul spent most of his time in this region in Achaia, at least eighteen months of which were in Corinth (Acts 18:11). Of all the churches in those regions, the congregation in Corinth seemed to be the one with the most problems – but also the most potential in some respects. This undoubtedly is why the Lord kept Paul in Corinth as long as He did and moved the apostle to write the two epistles to that church (2 Peter 1:21). 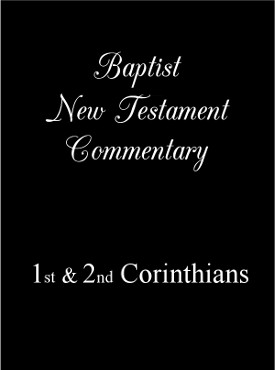